Good night, my fellows. Happy Halloween!
What would be better than a good vampire story along the way?
Yeah, right-- meeting one :D
Tonight, I have something special for you. To complete the vampire interview series for this year's occasion, I met an author who knows how to write a suspenseful fanatsy novel. Please welcome Amber Schunk-Clubb.
Good afternoon, Amber. Nice to have you for a chat. Please, introduce yourself to the readers.

Hello. My name is Amber Schunk-Clubb, author of “Roliath: The Eidelon Series”. (Which will be a 5 book series)  I’ve actually been working on this series off and on for 11 years and finally over the past 2 years I’ve been able to fully devote myself to my writing.  Ever since I received my first assignment to write a simple poem for a mothers day card in art class at school…I fell in love with writing.  It has followed with me ever since and even going into high school I took specialty writing courses to help further me along.  “Roliath” actually started out as an 8 page, hand written short story for a class assignment.  Which was called “Survival” not Roliath…it was also just another typical vampire story, and it remained that way for a few more years, lol.  But, as life tends to be busy, after graduating high school I rarely had any free time to write, but still did whenever and where ever I found I time.  Between living life, working, which often was 2 jobs at the same time, I slowly thought of and developed the world of Eidelon…the characters, the timelines/storylines for all 5 books, I’ve been creating all of it…I’ve just never had the time to sit down and write all of it.  However, everything always seems to find a way J When I first met and started to date who is now my husband, Roliath wasn’t finished and I only had maybe ten pages into the second book.  After our first year in marriage he provided me with the opportunity to leave my job so that I can have the time to devote myself to my writing. (Because he is super awesome J ) Since then, not only have I finished “Roliath”, but it is now published and available online.  I’m also just about to finish my first draft for the second book in the series (Secrets Unveiled) and nearly half way finished with book 3. What kinds of books fascinated you as a child?

Well, I grew up in the early-mid 80’s-90’s and shared a love for all of the spooky/horror movies, tv shows and books with my mom. Stephen King was always a favourite for all three of those areas. The Stand, The Shinning, Misery, Cujo, Carrie…just a few of the many that are still on my bookshelf today from back then.  Of course as I’ve gotten older I’ve grown an extremely wide range as far as what type of books fascinate me.

How many books have you published?

Your recent novel, “Roliath”, is about Vampires. What makes it different from other Vampire stories on the market?

Yes, the entire series is actually about vampires…however it is not just another typical vampire story. Vampires (Eidelon) are not even allowed to kill humans, the series does not revolve around them being monsters who kill, or how they can or should be killed.  It brings to light a much more plausible idea/view on vampires and I’ve been told that the readers almost forget at times that they are supposed to be a “vampire” and just get lost in the storylines and events of everything.  It covers such a wide range in genre from paranormal and fantasy to slight romance and action and adventure.  Just because you hear the word “vampires” doesn’t mean it’s going to be another typical story because… “Real vampires may not be what you thought” 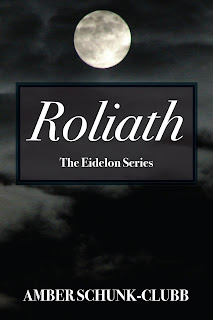 Who is your favourite character in your novel?

I don’t know why, but picking a favourite for anything…has always been a challenge for me, even for bands, books and shows ;) The main character, Geann, would probably have to be at the top though.  All of her talents and abilities, including those in battle…are pretty awesome. But, on the other hand…as odd as this may seem, Sheriff Dewit was one of my favourites to actually write.  I don’t want to give spoilers for those of you who have not read it, but, the variances in his character was fun to bring to life on the page. 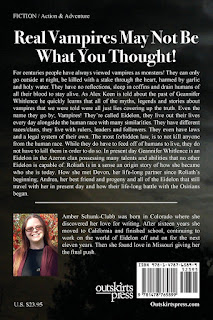 If you had the choice between having your novel adapted into a TV show or into a movie, what would you choose and why.

Either choice would be amazing, but, I guess I would say possibly a TV show.  Simply because it would give the chance to have the full story and the characters in it come to life on the screen.  Not only that, but, there are many areas in the books that are left open to be expanded upon in more creative detail.  I know a movie series could do the same, but I just think about how often a lot of things are left out when a book is turned into a movie.

Did you have special actors in mind when you created your characters?

I’ve always tried to write so the reader can have an easy time playing everything in their head like a movie as they read.  So, this is something I’ve often thought about over the years.  I have several ideas for many characters, but these are who stick out the most to me and whom I tend to picture when I write.

Dillon- Dave Franco from Now You See Me
Trevor- Scott Eastwood from The Longest Ride
Kenneth- Luke Evans from The Hobbit: The Desolation of Smaug
Georgianna - Famke Janssen from X-men

Patrick- Jake Busey from Starship Troopers
Geannifer and Devon I’ve always had a hard time picturing whom I would cast for them.  I’ve debated on a few for both, but recently my husband got me to watch Agents of S.H.I.E.L.D. and I might have found a possibility for one of them, lol.
- Brett Dalton from Agents of S.H.I.E.L.D
Who is scarier: Frankenstein or Dracula?
Hmmm, I think I might have to go with Dracula.  Both of them can be scary, but, Dracula can sneak up on you and attack unseen in ways that Frankenstein can not…at least in my opinion anyway.
What are your future projects?
Well, for now I’m just going to continue with The Eidelon Series.  As I’ve already mentioned, it is a 5 book Series…and I have 11 years worth of ideas and completed storylines that have been built up waiting to be written…And now I finally have the time to write them.
Do you have a message for your readers?
First I’d simply like to say “Thank you!” In a sense, without you I wouldn’t have a very easy time to move forward with the series.  I love hearing from you as well.  Feel free to continue reaching out to me with questions, comments, whatever…you’ll always get a response.  The Eidelon Series website will be posting information soon about another give-away and a little something for artists to participate in as well.  If you’re not signed up and want to keep yourself updated, you can do so here http://www.theeidelonseries.com/contact.html  Fill out the contact form and be sure to check the box that reads "Check here to receive email updates."
Thank you, Amber. We will all make sure to check out you novel ;)
To learn more about the author, please visit: Goodreads- Amber
HAPPY HALLOWEEN!!!!