Good morning, folks!
Dystopian novels have been fascinating the audience ever since Thomas More's Utopia was published in 1516. More's ideas were controversal, and his satirical tone, and the doublemeanings he incorporated in his work, got him into trouble. Utopia set the first milestone for a popular genre in which authors criticise the standards of society, give warnings, and sometimes give alternative ideas of a better world. Nowadays, we live in a particularly troubled world that gives room for more questions and thoughts like, "Who are we?", "Where do we belong?", "What is wrong?", "What do we want?", and "How can we change to lead a good life together?". But what if a dystopian novel actually scrutinized our mainstream superstitions?


Author Terry Shaffer explores the world in the 2050s. What about Aliens? What if they truly existed? Today, we have the chance to talk to the author  about his influences, his works and his ideas. Please say hi to Terry Shaffer!


Howdy Terry! Nice to meet you! Please, introduce yourself to the readers.


Very nice to meet you, Key.  My name is Terry Shaffer.  I live in Pittsburgh, Pennsylvania with my wife, Kimberly, and our cat, Rosie.  I wrote my first unpublished and unpublishable novels during the Reagan Administration – back in the days when “doing a re-write” meant sticking a blank sheet of paper in the typewriter and starting over…which is why we didn’t have nearly as  many writers in those days.  Beginning in 1992, I went to work for a Pennsylvania Assemblyman who had been a close friend since our youth.  After fifteen years of wallowing in the muck that is Pennsylvania politics, recognizing I’d lost all traces of my personal integrity through my loyalty to criminals, I voluntarily provided evidence to the PA Attorney General which led to his arrest and the subsequent indicted of much of the House Democratic Caucus Leadership.  Through that horrible-yet-cathartic process, I lost nearly all the possessions I’d managed to accumulate during that period and emerged relatively unscathed; free from the weight of my “wagon loaded with clay” (to quote the Grateful Dead) in the “lighter” version you see today.  And I discovered I could actually write, again!  (My personal mantra is James Thurber’s quote, “I never wrote a thing worth a shit until I was fifty.”)


What is the main genre in which you prefer to write?


While I have no doubt it is not a popular approach these days, I don’t set out attempting to write in any particular genre…at least, not a single one.  I try to write the kind of things I like to read.  And that usually involves crossing the lines between satire, politics and science fiction.  I personally believe pigeon-holing oneself and one’s work into a neat, easily defined compartment only serves to retard the process of self-discovery, which should be the fundamental element of any creative work.  If your goal is to write to make money, you can probably accomplish it with a modicum of talent and a great deal of perseverance.  But if your goal is to write something lasting and significant, you can’t do it without examining the “fuzzy edges” of reality that don’t fit neatly into a specific genre.


What is your fist novel, Random Notes From a Specific Deadhead, about?


Random Notes From a Specific Deadhead began as a fictionalized account of my experiences in politics and somehow morphed into a de facto tribute to the music of the Grateful Dead and, in particular, the lyrics of Robert Hunter.  The metamorphosis began when what had once been a minor character named Mo slowly took over the story.  I came to recognize the protagonist of the novel was really the person I had been.  Mo was more like the person I was becoming.  And the one undeniable characteristic of reality is that nothing is anything and everything is becoming something else. Like everything I’ve written since my youth, it seems, the fundamental message is that each of us must find our own way and, as Mo says in the conclusion, “As soon as someone says, ‘Follow me!  I know the way!’ he’s just as lost as you are.” 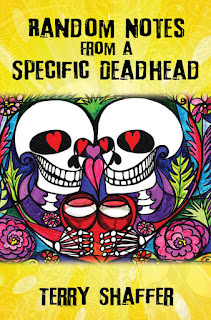 Your second novel, The Democracy Dramaturgy: Modern American Politics in Two Acts, is just hitting the electronic shelves. What made you think of its dystopian setting?


The setting for The Democracy Dramaturgy was actually chosen by the mysterious forces of the universe we mistake for coincidence and happenstance.  It began with the not-all-that-original idea that Jimmy Hoffa had been accidentally abducted by aliens when his television image was caught in a transporter beam.  I checked the date he disappeared to see if I could find another TV personality who might have been caught in the transporter at the same time and discovered Mayberry’s Goober Pyle, George Lindsay, was a guest on the Merv Griffin show the same day.  I checked when George Lindsay died and it was thirty-seven years after the appearance.  What star is thirty-seven light years from ours?  Muphrid.  The additional thirty-seven years it would take someone to return from Muphrid established the year of the second act as approximately 2050. 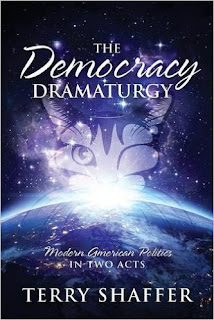 If you could travel in time, what time would you choose and why?


I imagine many people would answer by identifying a particular moment in the past they find interesting.  I would have no desire to time-travel to the past.  I know how that turned out.  But I’d love to take a glimpse into the not-too-distant future to see if our species made it over the self-destructive hump before which it presently sits. (I wouldn’t want to actually go there.  Just look down on it from above like Bush during Katrina.) In order to thrive and flourish as the dominant species on our planet we’ve had to develop levels of intelligence through which we could also destroy ourselves.  We have been inn a constant state of war, attempting to dominate each other as we have the other animals, since Abraham took charge six thousand years ago and God became a man.  I still see great potential in our species.  But I can also see we will never be able to tap into it as long as we permit ourselves and our children to be brainwashed with things like religion, patriotism and cartoons.


Are there any writers who influenced your style? What do you usually read, and what is your favourite novel?


I hope a reader will see the clear influence of Kurt Vonnegut and Douglas Adams when they read my work.  Vonnegut in particular.  What is markedly different, however, is the sense of optimism I present which was very rare during the Cold War.  I never read fiction when I’m writing it because I tend to subconsciously write like the author I’m reading.  But when I do I tend to stick with the classics, with David Copperfield and War and Peace topping my list of personal favorites.


What, in your opinion, are the most bothering flaws of society, and what would you like to change?


The most flawed and dangerous aspect of modern society – more than the nukes or the vaccine-resistant bugs or the rising oceans – is the control of power through the manipulation of information.  There is a very good reason why Americans go to the polls to cast their votes for someone who openly supports the agenda of people other than them.  It’s because they’ve been taught that’s what good Americans do.  And it’s because they’ve been misled by emotional issues only designed to distract them.  I understand the anger of the Trump voters because I saw it each and every day when I worked for a politician.  People are fed up with what their government has become.  But since they don’t understand what needs to be done to improve it they hitch their wagons to those of some numbskull who promises to take them to the Promised Land.  The simple fact is that they have been deceived by both Parties for so long they can no longer identify deception.  They have been force-fed bad information for so long they have become perfectly comfortable with dishonesty.  As long as politics is a major “for-profit” enterprise, the system cannot be improved.  But if we were to properly regulate our elections and their funding as we did before conservatives forced the idea “less regulation is always better” down our throats, I believe it would be remarkable how quickly the system would return to a state of relative health.  As long as we have a system designed by crooks to support the work or crooks, we can’t expect anything to change no matter who we elect.  If we have the ability to elect good people who are more concerned with effectively leading their nation and their world, rather than lining their pockets, the problems with nukes and the bugs and the oceans will be much easier to address.


What is your next project?


I would love to tell you what my next project is about and, in consideration of the fact I have about fifty pages of the first draft competed, one would think I should be able to do that.  But it is at present being taken over by a mad scientist who lives in the mythical underwater city of Philadelphia and in the process of forcibly evolving himself into a marine creature.


Do you have a special message for your readers?


My special message would be this…We live in a wonderful reality we are only beginning to understand and appreciate.  Don’t let yourself miss out of the wonders of life because you’re bogged down by human issues.  We just aren’t that significant.


Thanks a lot, Terry, and best of luck with your projects. If you want to find out more about the author and his novels, please visit: