Today, I want to do a review of a book I read some time ago. I was looking for some fiction that would remind me of books, like Bartimaeus by Jonathan Stroud, that I knew from childhood. I wanted something full of suspense; something that would draw me in. In short, a world full of fantastic, mysterious creatures. So, I had some friends over for tea, and we talked about our latest reads. At the end, I was left with a list of great recommendations. However, one specific book sounded so interesting that I decided to start reading it right away. I bet you now wonder what book I am talking about. Well, let me tell you: It is Raven's Peak by Lincoln Cole. It is a quite recently published work of 276 pages with a pretty dark cover, showing a raven on a rock at its front. My first impression was: Holy spirit! That looks like one of Edgar Allan Poe's works. It kinda reminded me of Poe's The Raven. Full mark for the choice of the cover design, man! I am a huge E.A. Poe fan. I really love the dark atmosphere of his writings, and there is nothing better than the creepiness one feels upon reading them. With high expectations, I turned the first page, and I found myself pulled into the story right away. There was no introduction; no epiglogue or anything alike. Instead, the story started right in the middle of the action. At first, I was a bit confused. To be honest, I needed some time to find my way into the plot. Oh yeah, right... the plot. Let's have a look at it. So, the book description says:

A quiet little mountain town is hiding a big problem. When the townsfolk of Raven's Peak start acting crazy, Abigail Dressler is called upon to discover the root of the evil affecting people. She uncovers a demonic threat unlike any she's ever faced and finds herself in a fight just to stay alive.
Abigail rescues Haatim Arison from a terrifying fate and discovers that he has a family legacy in the supernatural that he knows nothing about. Now she's forced to protect him, which is easy, but also to trust him if she wants to save the townsfolk of Raven's Peak. Trust, however, is something hard to have for someone who grew up living on the knife's edge of danger.
Can they discover the cause of the town's insanity and put a stop to it before it is too late?
(Source: Raven's Peak- Goodreads ) 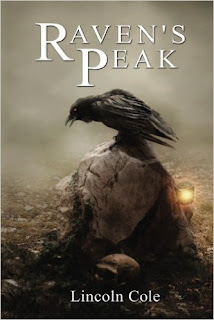 Abigale is possessed by a demon. I got that after a few pages, and I found myself intrigued on the spot. The young girl is part of a secret organization that hunts down dark creatures, and, when she meets the very human Haatim, who is confused to find himself drawn into a world full of supernatural things, she find a new confidant.
While Abigale felt rather estranging to me, because of her missions and her actions, I could feel with Haatim. The character seems to be a focal point for the readers, so that they can feel closer to the happenings and the feelings of the protagonists. When both characters go on their mission to save the world, a battle between good and evil starts.
I won't tell you what discoveries Haatim makes, and I also won't tell you how he and Abigale save humanity from the ancient demons that feed on the darkness of mankind. But I will tell you that the confusion and the fear of the characters was contagious. Cole does a great job in creating dynamic, very realistic characters in a fictional world. When I had read the last page, I realized that the novel leaves room for a sequel, and I also found myself impatient to read more. I guess that says enough about the quality of the novel. In one word: AMAZING! I honestly can't wait for the next book, and I give Cole's work five out of five stars! Guys, if you are looking for a fantasy story you can't put down, then go ahead and start reading Raven's Peak.

Here is where you can get it:
Amazon: Raven's Peak